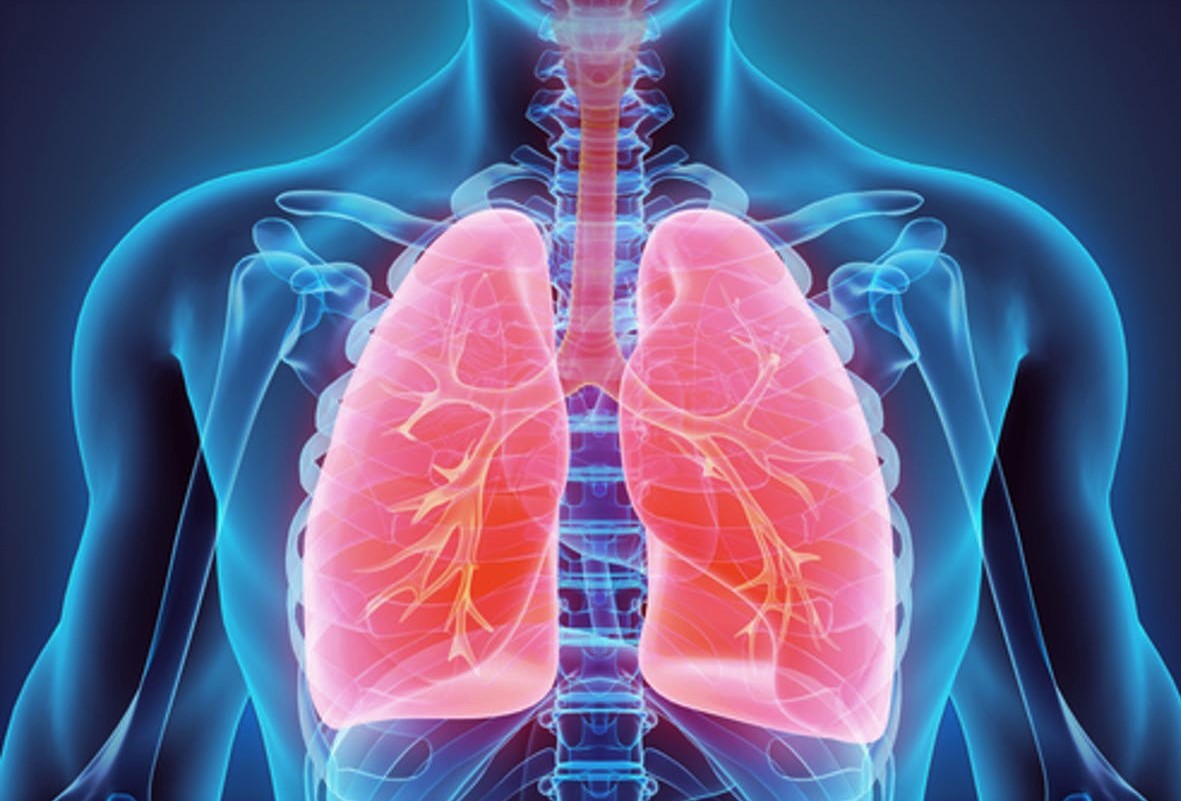 All the cells in the lungs are constantly renewing themselves. However, the lungs contain different cells that renew themselves at different rates. The alveoli or air sac cells, deep in the lungs, which are needed for the exchange of oxygen and gases, have a steady progress of regeneration that takes about a year.

Meanwhile, the cells on the lung’s surface have to renew themselves every or three weeks. These are the lungs’ first line of defense, so they have to be able to renew quickly.

During seasonal changes and challenges — and when you’re exposed to environmental pollutants — your lungs can become inflamed, making it difficult to breathe deeply. Taking herbs for the lungs can help support your respiratory health when you face these issues.

Herbs provide a natural, plant-based option to help your body maintain healthy lung and sinus function, and to support a strong respiratory system.

Even before we knew what free radicals were — toxins in our food and environment that can cause cellular damage — Traditional Chinese Medicine used Schisandra  to combat them for hundreds of years.

Schisandra is used for a wide range of health-related issues. It has been traditionally used for both dryness or phlegm to help maintain healthy lungs

With both heightened immune challenges and exposure to environmental pollution, our lungs work hard every day and play a key role in keeping us strong and well.

Yarrow is native to Europe and western Asia, where it has a long tradition of use in herbal medicine.

Legend has it that the ancient Greeks used Yarrow to treat the bleeding wounds of soldiers during the Trojan War more than 3,000 years ago, but it’s also  supporting lung and respiratory health.

Black Seed Oil is made from the seeds of the Nigella sativa flower that is native to regions around the Mediterranean. It has been used for thousands of years as a way to support lung, sinus, and respiratory health.

Ayurvedic tradition makes use of cold-pressed Black Seed Oil because the process preserves the plant’s natural chemical profile and balance, providing the full-spectrum of constituents, while at the same time providing all of the seed’s health benefits.

Don’t confuse plantain herbs for lungs with the fruit of the same name. Plantain fruits are a member of the banana family and are often called green bananas or cooking bananas (because they need to be cooked before you eat them).

The Plantain herb, on the other hand, has been used throughout Europe and North America to support a healthy immune, strong lungs, and a clear respiratory system.

Because plantain naturally contains mucilage and has moist cooling properties, it has an inherent ability to support mucous membrane health which is vital for lung function, by soothing occasional irritation.

Licorice is one of our favorite herbs because one of its active ingredients — glycyrrhizic acid — is 50 times sweeter than sugar. Because of this, the herb has been cultivated as a flavoring for everything from food and candy to tobacco and alcohol.

Licorice is considered a tonic plant in many traditional medicinal systems and is one of the most widely used and trusted herbs among traditional botanical practitioners.

The ancient Greeks recognized the value of mullein herbs for lung health some 2,000 years ago. The dried leaves were traditionally used as a tea supporting pulmonary and respiratory function.

Whether you take Mullein in a pill, steep it in hot water to make tea, or infuse it in an oil for use in a vaporizer, you’ll enjoy all the respiratory and lung benefits Mullein has to offer.

At first glance, elecampane may look like a sunflower. While it is a member of the same family, this herb offers different benefits than the common sunflower.

One of the key differences between elecampane and the sunflower is that the former contains a chemical compound called inulin. Inulin has been shown to support healthy immune function and to help maintain healthy lungs and a strong respiratory system.

Elecampane is very astringent and bitter. Because of this, it is best taken in combination with other herbs. Some of the herbs that work best with elecampane to support respiratory health are:

The vibrantly colored root and greens of the beetroot contain compounds that optimize lung function.

Beetroot supplements have been shown to improve physical performance and lung function in people with lung conditions, including chronic pulmonary disease and pulmonary hypertension, a disease that causes high blood pressure in the lungs

Additionally, beet greens are packed with magnesium, potassium, vitamin C, and carotenoid antioxidants — all of which are essential to lung health.

Peppers are among the richest sources of vitamin C, a water-soluble nutrient that acts as a powerful antioxidant in your body. Getting enough vitamin C is especially important for those who smoke.

In fact, due to the damaging effects of cigarette smoke on your body’s antioxidant stores, it’s recommended that people who smoke consume an extra 35 mg of vitamin C per day.

The brightly colored flesh of pumpkin contains a variety of lung-health-promoting plant compounds. They’re especially rich in carotenoids, including beta carotene, lutein, and zeaxanthin — all of which have powerful antioxidant and anti-inflammatory properties.

Studies show that having higher blood levels of carotenoids is associated with better lung function in both older and younger populations.

Turmeric is often used to promote overall health due to its potent antioxidant and anti-inflammatory effects. Curcumin, the main active component in turmeric, may be especially beneficial for supporting lung function.

A study in 2,478 people found that curcumin intake was associated with improved lung function.

Tomatoes and tomato products are among the richest dietary sources of lycopene, a carotenoid antioxidant that has been associated with improved lung health.

A 2019 study in 105 people with asthma demonstrated that a diet rich in tomatoes was associated with a lower prevalence of poorly controlled asthma.

Blueberries are loaded with nutrients, and their consumption has been associated with a number of health benefits, including protecting and preserving lung function .

Blueberries are a rich source of antioxidants like  anthocyanins, malvidin, cyanidin, peonidin, delphinidin, and petunidin. Anthocyanins are powerful pigments that have been shown to protect lung tissue from oxidative damage.

Green tea is a beverage that has impressive effects on health. Epigallocatechin gallate (EGCG) is a catechin concentrated in green tea. It boasts antioxidant and anti-inflammatory properties and has been shown to inhibit fibrosis or scarring of tissues.

Pulmonary fibrosis is a disease characterized by progressive, lung-function-compromising scarring of lung tissue. Some research shows that EGCG may help treat this disease

Red cabbage is an affordable and rich source of anthocyanins. These plant pigments give red cabbage its vivid color. Anthocyanin intake has been linked to a reduced decline in lung function.

What’s more, cabbage is packed with fiber. Studies show that people who consume more fibre have better lung function than those who consume low amounts of fiber.

Consuming olive oil may help protect against respiratory conditions like asthma. Olive oil is a concentrated source of anti-inflammatory antioxidants, including polyphenols and vitamin E, which are responsible for its powerful health benefits.

For example, a study that included 871 people found that those who had high olive oil intake had a reduced risk of asthma.

Oysters are loaded with nutrients that are essential to lung health, including zinc, selenium, B vitamins, and copper.

Studies show that people with higher blood levels of selenium and copper have greater lung function, compared with those with lower levels of these nutrients.

Additionally, oysters are an excellent source of B vitamins and zinc, nutrients that are especially important for people who smoke.

Smoking depletes certain B vitamins, including vitamin B12, which is concentrated in oysters. What’s more, studies show that higher zinc intake may help protect smokers from developing chronic pulmonary disease.

Yogurt is rich in calcium, potassium, phosphorus, and selenium. According to research, these nutrients may help boost lung function and protect against chronic pulmonary disease.

A study in Japanese adults found that higher intakes of calcium, phosphorus, potassium, and selenium were associated with increased lung function markers, and those with the highest calcium intake had a 35% reduced risk of chronic pulmonary disease.

Brazil nuts are among the richest sources of selenium that you can eat. A single Brazil nut may contain over 150% of the recommended intake for this important nutrient, though concentrations vary significantly depending on growing conditions

Studies show that a high selenium intake may help protect against lung cancer, improve respiratory function in people with asthma, and enhance antioxidant defenses and immune function, which may help improve lung health.

Because Brazil nuts are such a concentrated source of selenium, it’s recommended to keep your intake to just one or two nuts per day.

Additionally, many studies have linked greater intake of leafy green vegetables like silver-beets and spinach to a reduced risk of lung cancer.

Cacao products like dark chocolate are high in flavonoid antioxidants and contain a compound called theobromine, which helps relax the airways in the lungs.

Cacao intake has been associated with a lower risk of allergic respiratory symptoms and may help protect against lung cancer.

Additionally, a study that included 55,000 people found that those with higher flavonoid consumption from foods, including chocolate products, had better lung function than people who had diets low in flavonoids.

Try incorporating a few of the foods and beverages listed above into your diet to help support the health of your lungs.

Consuming a diet high in nutritious foods and beverages is a smart way to support and protect your lungs..

Good breathing techniques are of course essentials but this topic is another whole chapter!

Mullein: The Herb that Fights Infections and Inflammation

Wild vascular plants gathered for consumption in the Polish countryside: a review.

The Health Benefits of Elecampane: An Herb Used to Help Respiratory and Digestive Issues