In traditional Chinese medicine, the Lung organ-meridian system encompasses not just the lungs themselves but also the sinuses, throat, mouth and skin. Together, these tissues play a vital role in immunity by helping to disperse Defensive Qi (a specific form of vital energy or Qi that helps you fend off disease) throughout your body.

According to Chinese philosophy, it is natural for the Lung Qi to disperse in a descending direction. However, when you’re affected by an upper respiratory infection such as a cold, flu or bronchitis, your Lung Qi may accumulate and eventually move upwards instead of downwards, triggering a cough.

Fusion Health Cough Lung Tonic™ contains the Chinese herbs Pinellia, which has traditionally been used to promote the descent of Lung Qi and Balloon Flower, which aids its dispersion in the body.

Also present are a synergistic blend of Chinese and Western herbs that have traditionally been used to relieve both wet and dry coughs and promote the expulsion of mucus, including Aster, Licorice, Elecampane and White Horehound.

Suitable for vegans and vegetarians.

Always read the label. Use only as directed. If symptoms persist consult your healthcare practitioner.

For all ages, an extra dose may be taken to enhance results or as professionally advised.
During pregnancy, always consult with a qualified healthcare practitioner before taking herbal medicines and nutritional supplements.

There are no reviews yet. 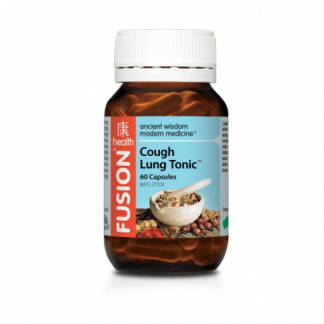 Our shop will be temporarily closed until Friday the 8th of July.

We thank you for your valued support, and we’ll be back soon!