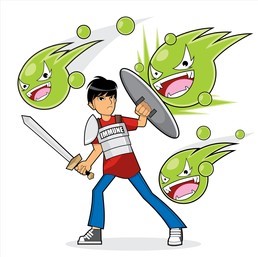 A healthy immune system is critical for general physical health and may contribute to mental health as well. Immune modulating herbs are herbs that broadly support the immune system. They can help the body defend against pathogens by adjusting the normal immune response to respond more effectively when a pathogen has been detected. These balancing herbs can be used in signs of excess, such as autoimmunity and allergies, and signs of deficiency as seen in frequent infections. They can be used prophylactically as well, especially during the winter months to help prevent viral infections such as the common cold and influenza.

The immune system is increasingly found to be involved in the development of a number of chronic illnesses for which allopathic medicine has limited tools for treatment and especially prevention. Herbal medicines, specifically immune modulating herbs, are frequently being used in the treatment of chronic conditions. These conditions are inadequately managed by conventional medicine which offers exceptional symptomatic and emergency-oriented medicine but often fails to get to the cause of the problem and is plagued by side effects from its solutions. The term ‘effectiveness gap’ refers to an area of clinical practice in which available treatments are not fully effective. These include many of the chronic non-communicable and degenerative diseases that are now making the most pressing demands on healthcare systems in the developed world. Herbal medicine may be used independently in these contexts or to support orthodox treatment and counteract the side-effects of conventional drug therapy. When immune modulating herbs are used in this situation they are generally a significant part of an overall plan which will also include addressing diet, lifestyle, and other herbal formulas specific to the condition.

Immune modulating herbs are traditional tonics for supporting the immune system and are slower acting with a more prolonged effect as compared to immune enhancers (or stimulants). They are usually taken regularly for an extended period of time, often six months to a year or even a lifetime. They are generally considered safe for everyone’s use and are often taken traditionally in foods such as bone broth. Many immune modulating herbs are also adaptogens that help to restore balance in the immune system when there is a problem.

Some Immune modulator herbs are:

Astragalus (Astragalus membranaceus): A well known immune modulator and adaptogen, astragalus can help build and restore overall health by slowly nourishing the body deeply over time. This makes it the perfect herb to support the immune system during the winter months. It is among the most popular and important qi (life force) tonifying herbs in Traditional Chinese Medicine (TCM).

Reishi (Ganoderma lucidum): Reishi is a powerful medicinal mushroom that has been widely used for promoting health and longevity in Asian countries. It is prescribed to enhance immune resistance. In Western herbal therapies reishi is primarily used for its tonic properties, especially its use as an immune modulator. For this purpose it is often used in conjunction with chemo- and/or radiation therapies in the treatment of cancer as a means to help in the prevention of opportunistic infections and to counter side effects associated with conventional therapies. A recent Cochrane review concluded that reishi could be administered as an alternative adjunct to conventional cancer treatment in consideration of its potential of enhancing tumour response and stimulating host immunity.

Siberian ginseng (Eleutherococcus senticosus): Siberian ginseng is often referred to as the ‘king of adaptogens’ and is traditionally used to help the body better adapt to stress. As an immune modulating herb it helps to strengthen the immune system over time to reduce the chance of catching a cold or other common infectious diseases.

Withania (Withania somnifera): Withania, commonly known as ashwagandha, is a revered medicinal plant that has been used in Ayurvedic and indigenous medicine for millennia as an adaptogen to relieve stress, increase energy levels and improve concentration. As an immune modulator it can support the health of the immune system. It is recommended for people who have immune system disorders such as human immunodeficiency virus (HIV) or chronic infections as well as for those who tend to get every upper respiratory virus that comes their way. Cancer specialist and herbalist Donald Yance says he uses withania as an immune modulator with his cancer patients. “I use withania in adaptogenic formulas for all my patients with cancer during and after chemotherapy, radiation and surgery. The immune modulating activities of withania have been well researched and are significant.”